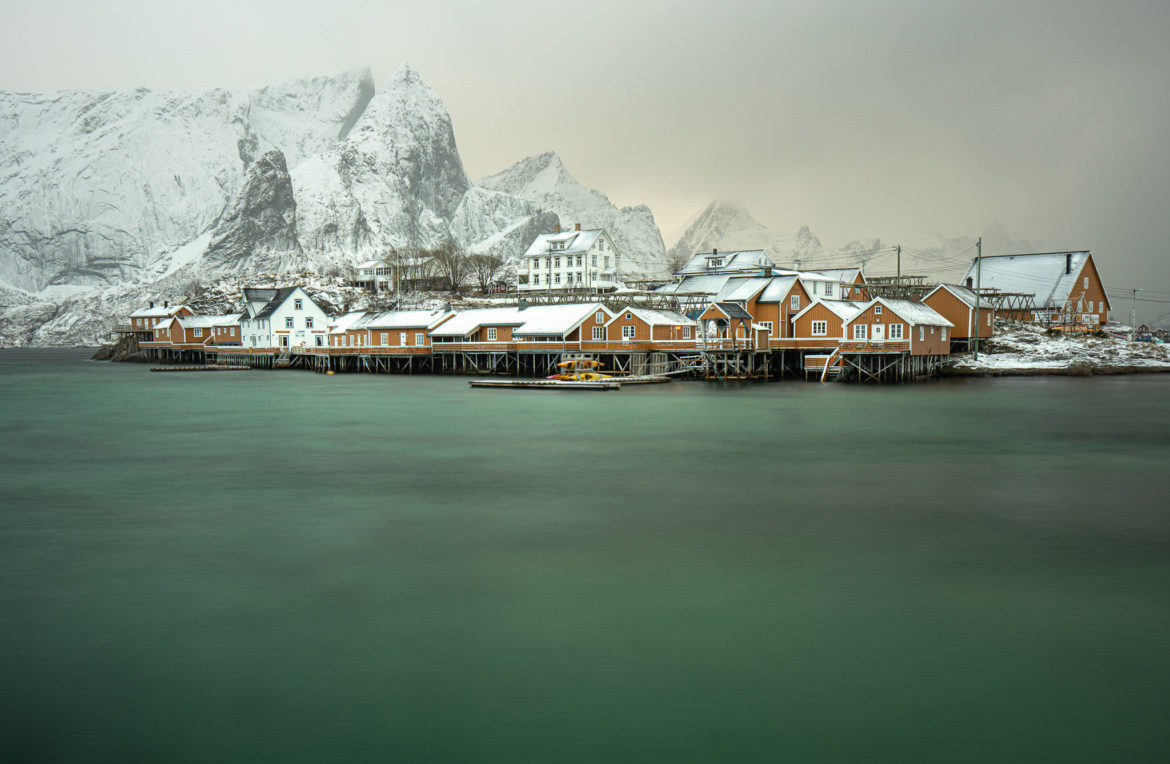 Almost lagoon-like, the small bay of the Reinefjord with the island Sakrisøya lay in front of me. In this area, the water is so shallow and with a sandy bottom that it glows green.

It was the day with blizzards and I had to stand behind a hut again and again in search of protection when the next storm front with snowfalls came. Mostly I had only 1–2 minutes to quickly set up my tripod again and make a longer exposure. On the picture you can clearly see the next snow shower approaching, the mountains in the west of the Reinefjord were only vague visible. It was important to me to reproduce the green of the water in the picture. This is why I had chosen a longer exposure in order to banish the restless surface of the waves from the picture.

Sakrisøya is so special because the Rorbuer cabins at the shore of the fjord are all painted yellow. Otherwise you can usually see red Rorbuer on the Reinefjord. Between the cabins you can see stockfish racks everywhere and high above everything there is an administration building on the rock. 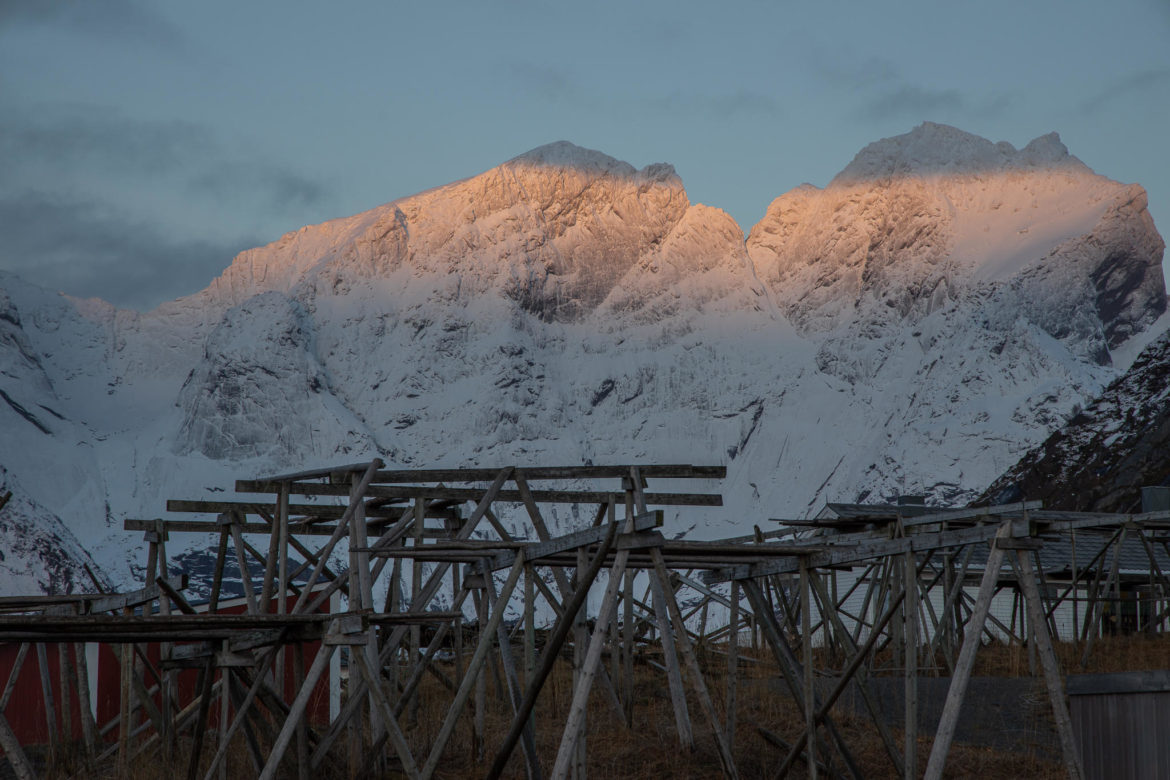 I had to wait 3 days for this moment, it was always overcast or even rainy during the day. When I was on Hamnøya that day, looking for motives with the stockfish racks, the sun came through the cloud cover for a short moment and illuminated the ridge next to Olstinden. I had so hoped to see the sun on the mountain itself or next to me on the Festhelltinden. But that’s nature for you, it doesn’t depend on the visit of a single photographer (even if there were hundreds of them!). What I like so much about this picture is the integration of the typical Lofoten landscape with its stockfish racks.

So I enjoyed the colour of the sunlight very much nevertheless. It is really impressive when the mountain tops start to glow like this. Only 5 minutes later this was already over before I could even change the location. But with a longer focal length I was able to take a second picture before.

END_OF_DOCUMENT_TOKEN_TO_BE_REPLACED 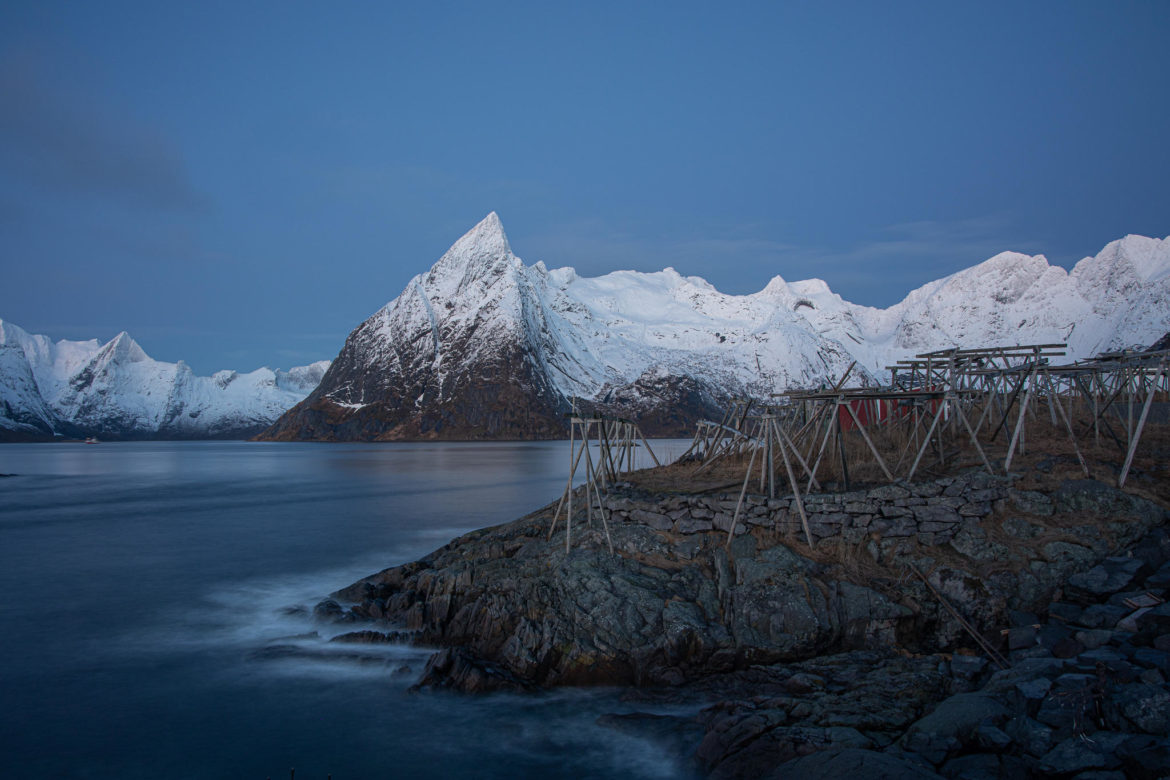 The islands in the Reinefjord are home to many fishermen, you can still see modern fishing trawler at every corner. Every free space on the rocks is used to put up stockfish racks. On Hamnøya at the eastern end of the fjord you know the classic view from the bridge over to Toppøya. But it does not show some classic fishermen’s houses but modern holiday houses in the style of the rorbuer. Thus, I concentrated on a condensed view in the middle of the stockfish racks, even if with the mountain Olstinden in the background.

END_OF_DOCUMENT_TOKEN_TO_BE_REPLACED 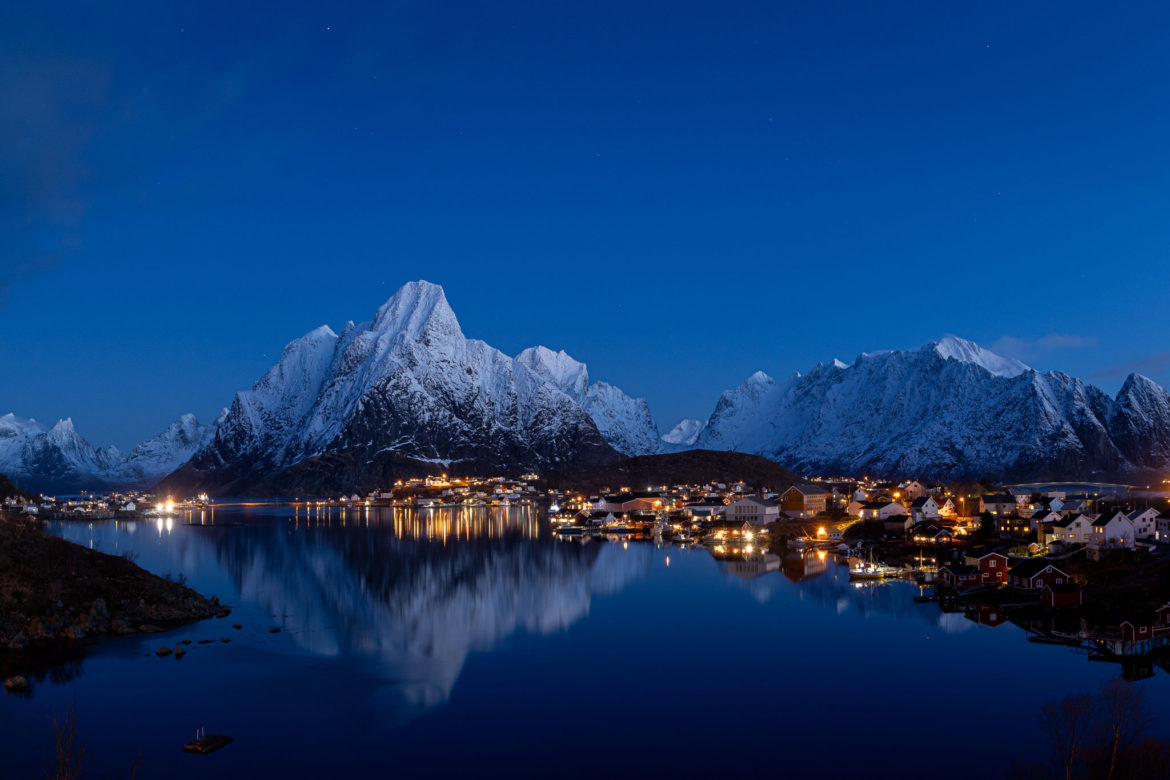 The cover picture of this article is only an section of the panorama, so it’s worth opening the article to let the full magnificence of the picture take effect.

After I left my accommodation in Å in the morning hours still in darkness, I set off for Reine to finally see the sun on the mountain tops. It was still clear and I saw the stars above me when I arrived at Reinefjord. But what I got to see here made me forget the sun very quickly. It was nearly calm and so the mountain panorama was reflected in the water of the fjord! On the left is the Veinestinden, in the middle the iconic Oltstinden and on the right the Festhelltinden.

END_OF_DOCUMENT_TOKEN_TO_BE_REPLACED 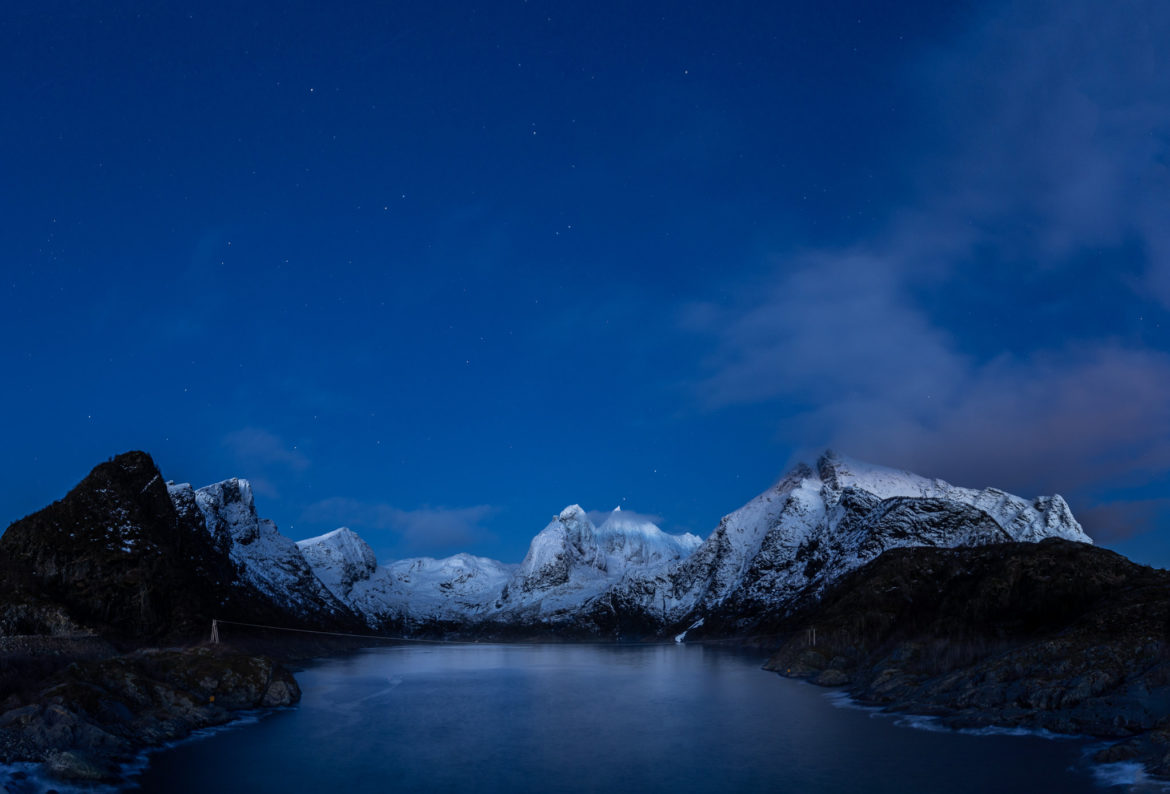 At night on the way to Reine, just out of the corner of my eye, I saw the snow-covered mountains above the small fjord and braked immediately (luckily there was nothing going on on the roads at that time!), turned around and drove back to the parking lot.

What a sight with the stars above the mountain tops! What was clear that I would be able to capture this atmosphere only with a wide crop and so I took this picture as a panorama with 3 portrait format images. I really wanted a lot of sky to be in the picture. 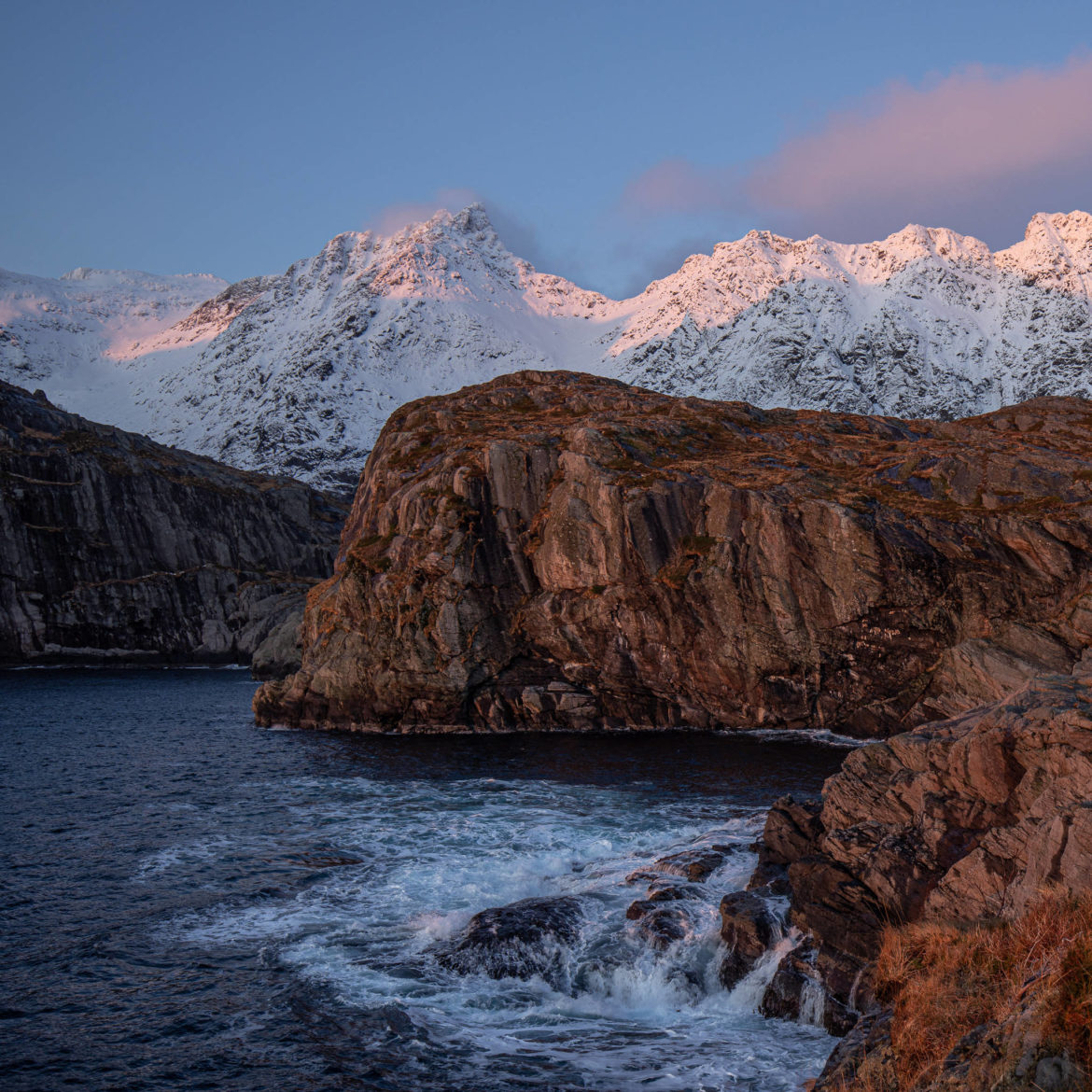 During my stay in the Lofoten I first had to learn from the local people that in the Lofoten one always only has to go east (towards the mainland) and west. This might be still valid for the eastern part, but I arrived in the south of the islands and had the feeling to drive more to the north and/or south when I drove from Å to Reine and back again.

Ok, so I was heading west when I came back from Reine that day and just drove on to the parking lot above Å. From the parking lot you can walk a bit further and get to the viewpoint of Å — which by the way is not called »Lands End«, because the islands are much further south! Here, one looks further south along the rock face of Lofoten, beyond the Moskestraumen to the islands Mosken and Værøy. The Moskestraumen is one of the strongest tidal currents on earth and is said to have inspired painters and writers (maelstrom) to exaggerated depictions of its water vortices.

But I could not perceive any of this from here. Only the sun passed the cloud bank at sunset and illuminated the coast around me so beautifully. The fact that I also had a shallow in the picture below the cliffs, over which the waves broke again and again, makes this picture perfect for me. 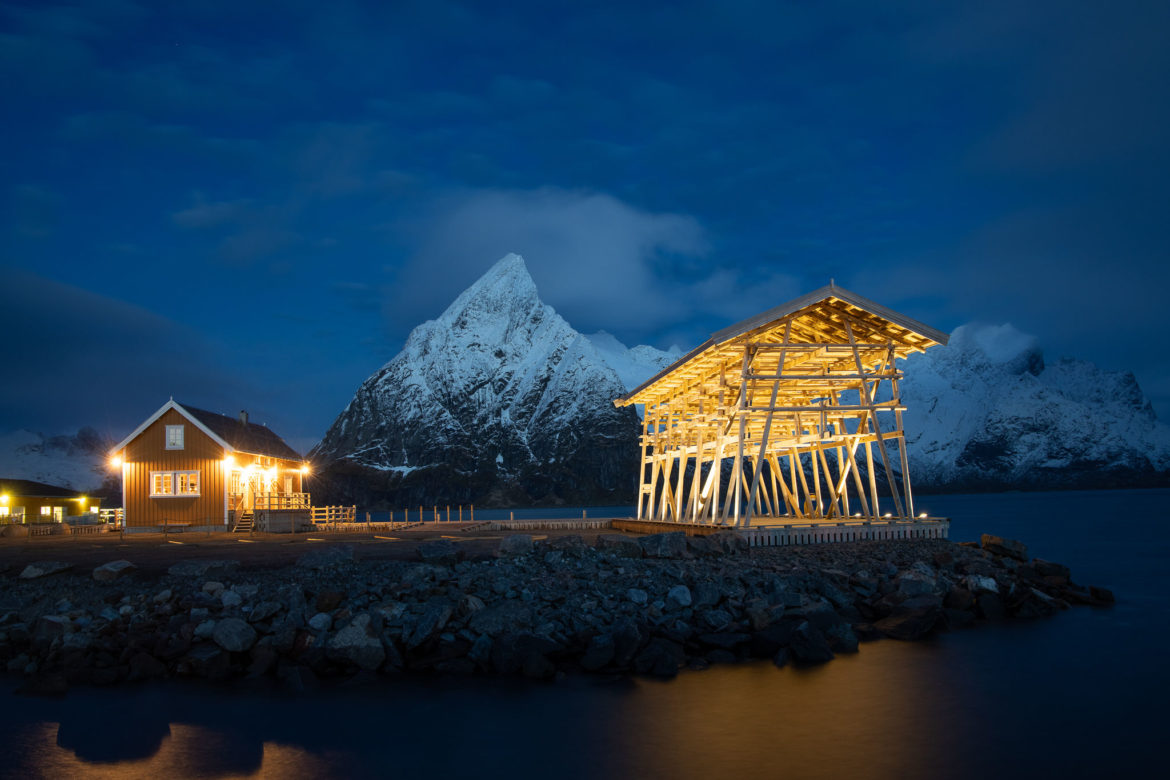 It is wonderful to walk along the shore of Reinefjord and see different perspectives of the view of the two mountains Olstinden and Festhelltinden. All this in the early hours of the morning before the sunrise in January gives the motives a beautiful light. I started my photo hike on the small island Sakrisøya. There is a very decorative stockfish rack with a roof and lighting, which for me is something like a billboard for stockfish. In the immediate proximity there is also the fish restaurant Anita’s Sjømat that does not only sell fish dishes but also stockfish and other specialities. Beside it there is one of the typical rorbuer in Sakrisøya — here, they are all painted yellow and not in red as it is the case in Å. Both go together in my picture, the warm light of the lamps that illuminate the stockfish rack and the warm colour of the house, which is also illuminated from outside. In between is the mountain Olstinden in the background — an icon of the Reinefjord. END_OF_DOCUMENT_TOKEN_TO_BE_REPLACED