This unimpressive mountain range lies in front of the well-known, legendary volcano Hekla. You can see above the moss-covered Næfurholtsfjöll still just below the clouds the partly with snow and ice covered cap of the volcano.
For me, the erosion gullies in the moss surface were the motif of choice, especially because they zigzagged through the mountain flank. And because it was once again the great green/black contrast!

But who sees the white spots, the sheep in the picture? How many are there? 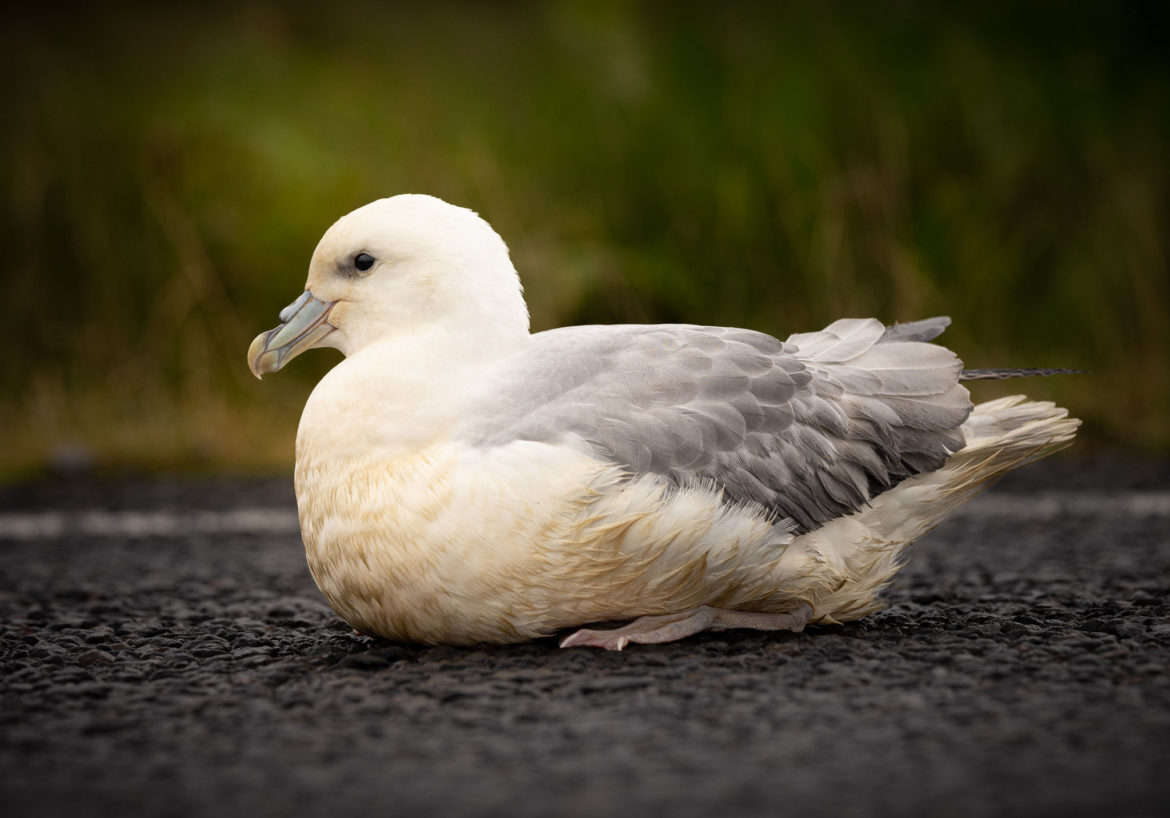 This might be a big bird, but it is still a baby bird. Each Year between August and September many big white birds get killed on streets in Iceland. They are young Northern Fulmars which cannot fly. The nest is in the rocky cliff line. They try to get to the sea. Since their feathers are not yet fully developed they usually land in rivers that carry them to the sea. Sadly, the birds often mistake roads for rivers. That happens for example often near Vík í Mýrdal in the south of Iceland.

So it happens that they sit in the middle of roads and cannot fly or go away when cars are coming!

Sadly i found many white feather piles on the road as I approached Vík. Later, on the side road to Dyrhólaey I found this bird on my road, passed by and used the next possibility to stop, take this image (with 500mm!) and than tried to scare him away from the street. But I only got a look from his big dark eyes, what I might be up to! Later, ob my way back I found this place empty, so he made it away from the road. 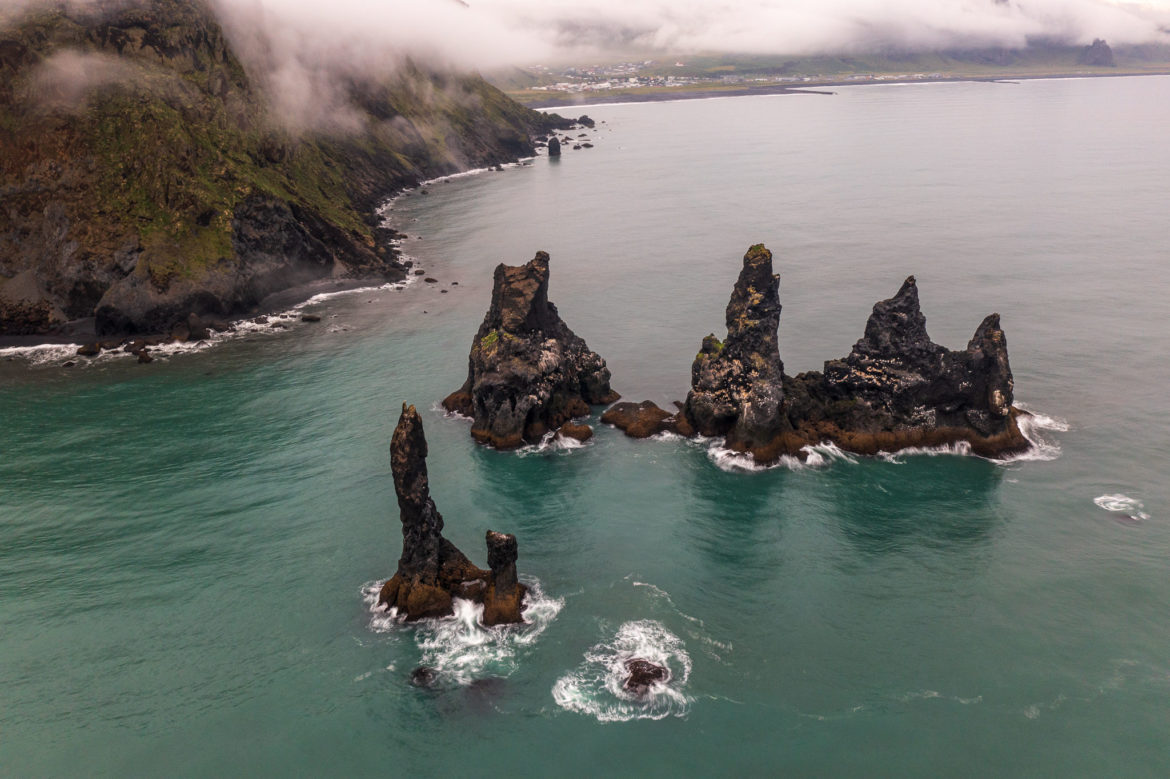 Off the coast of Vík í Mýrdal stand these lava columns. They are a much photographed motif, but mostly in stormy weather from land. You can photograph out of the lava caves and take basalt columns on their sides into the motif. But on that day, firstly the light was too boring for me and secondly there was too much going on in the lava caves. But the weak wind allowed me to start the drone and fly far out to sea. I really wanted to photograph the lava columns of Reynisdrangar from the sea. To smooth the sea a bit, I had put on a gray filter and could thus work with 1 second exposure time. That I could bring there so good and above all sharp photographs, surprises me still — I used no tripod in 120 meters height above the sea!

I even managed to take a series of shots for a panorama. You can see not only the mighty old lava flow on land but even the glacier Mýrdalsjökull in the background: END_OF_DOCUMENT_TOKEN_TO_BE_REPLACED 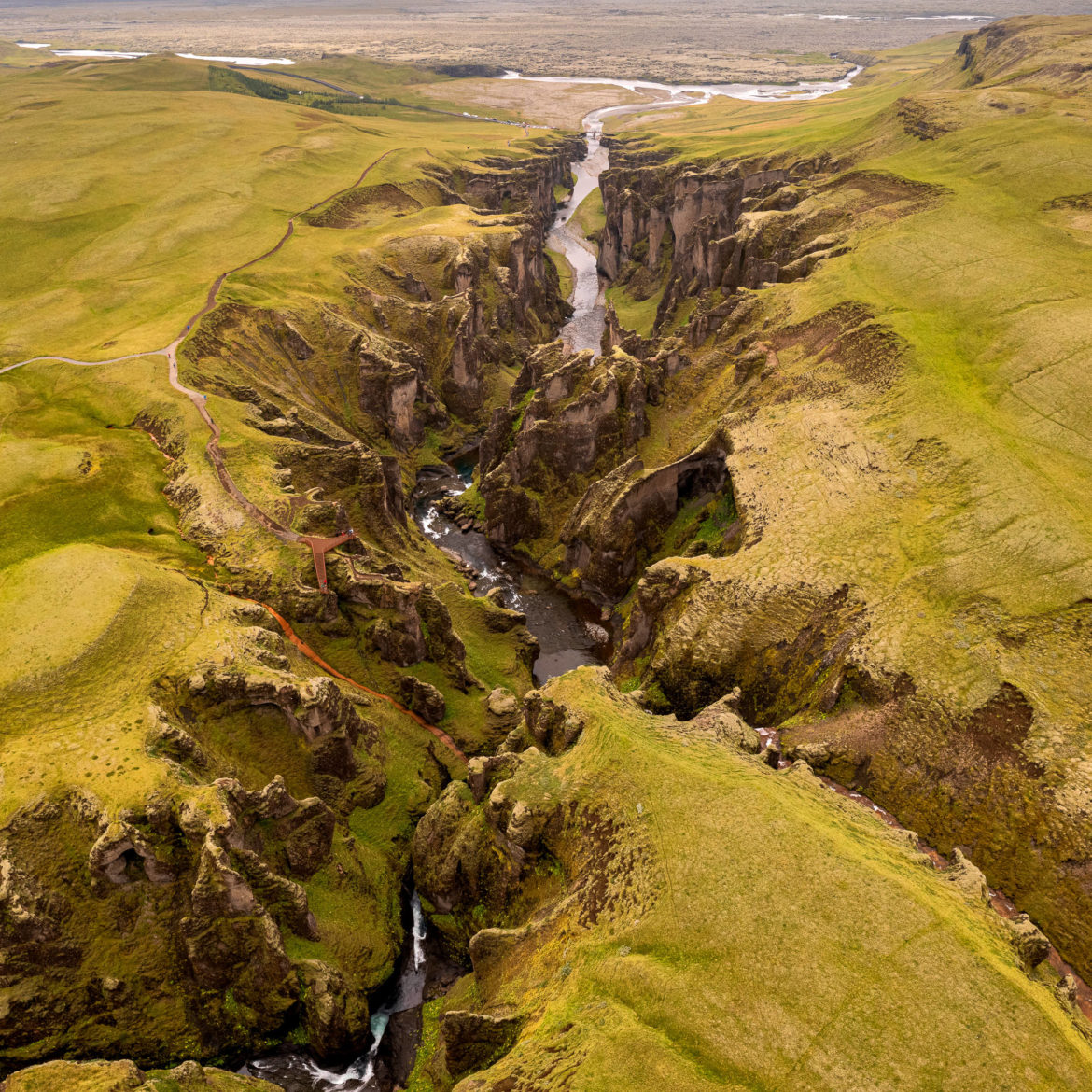 Fjaðrárgljúfur Canyon is located between the sands of Mýrdalssandur and Skeiðarársandur close to the ring road. On the way there, the highland road F206 branches off, leading north to the Laki crater row. The canyon itself had gained sad notoriety because Justin Bieber almost destroyed it in 2015 for a video clip by his film crew and the subsequent hype. In Iceland, mosses grow very slowly and mossy areas that are traveled on take many decades to recover. It’s the same with trails that lead to every viewpoint rock here in Fjaðrárgljúfur Canyon. After the hype, the canyon was completely closed to visitors for some time and two steel viewing platforms were added.Only two paths still lead to two of the rocks, all others are closed off extensively.
To my surprise, drone use was allowed under the European Drone Regulation — do not fly over people or animals. That’s easy because the canyon itself is off limits. And so I managed to get this wonderful view of the canyon looking south towards the Eldhraun lava flows!

END_OF_DOCUMENT_TOKEN_TO_BE_REPLACED 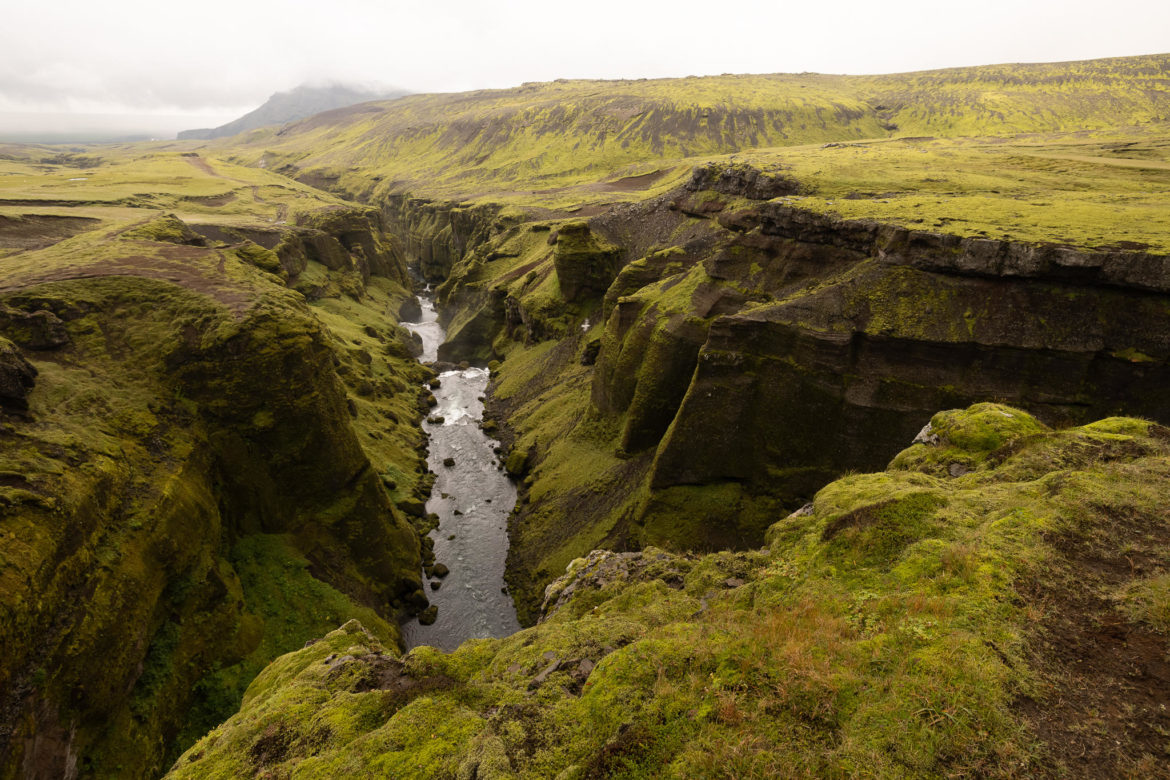 It was once again one of those gray, rain-cloud-covered days in Iceland, but at the same time the days of lush green! I had arrived at Skógafoss and found the waterfall itself quite boring, although it thundered with great force on a width of 25 meters 60 meters into the depth. However, I had made up my mind before leaving for Iceland to hike above the waterfall in its river valley. The route is part of the long-distance hiking route Laugavegur from Landmannalaugar to Skógar, which runs here as a long day hike from Þórsmörk between the glaciers Eyjafjallajökull and Mýrdalsjökull. But I didn’t want to hike all the way to the ridge, especially because the weather with the constant drizzle didn’t invite to a day hike either.

END_OF_DOCUMENT_TOKEN_TO_BE_REPLACED

On the way to Skógafoss, the Eyjafjallajökull glacier comes closer and closer to the course of the ring road. Even though the glacier itself was hidden in the clouds, the view of the mountain range offered an incredible amount of detail. I had once again taken out my telephoto lens and condensed the landscape. Just a small piece of a pasture in the foreground and then the view of the hillside with a multitude of watercourses and small canyons.

There is much to discover in this motif. 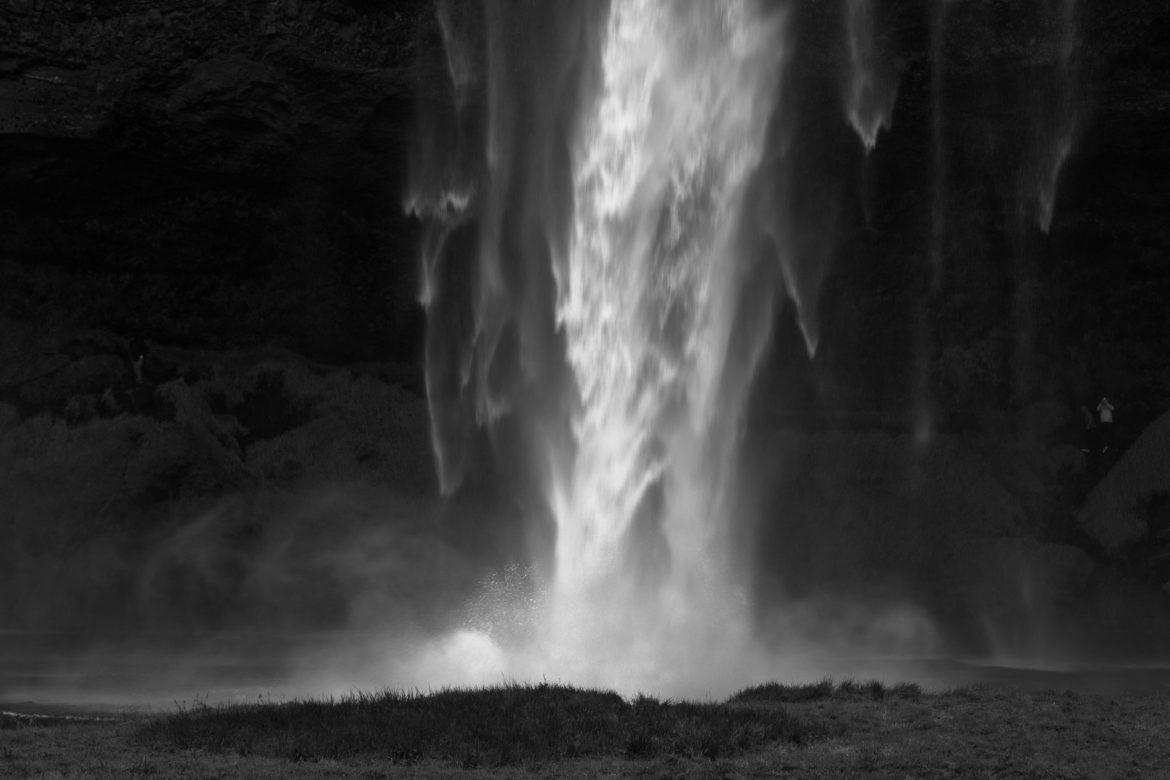 One of the most photographed waterfalls in Iceland. The special thing is that you can go into a cave behind the waterfall and take pictures in the evening hours through the waterfall to the setting sun. I was still under a gray cloud cover after my visits to the volcano, so I had to come up with something else as a subject.

White veils of water against a white sky just don’t work. But this crop in the opposite direction expresses so much of the dynamics of the waterfall. The water crashes onto a stone slab and splashes away to the sides. To the left and right of the main stream, weak streams plunge into the depths. In the photo they can be seen as translucent curtains to the left and right of the main fall. A thoroughly interesting motif in black and white — and certainly a rare view.