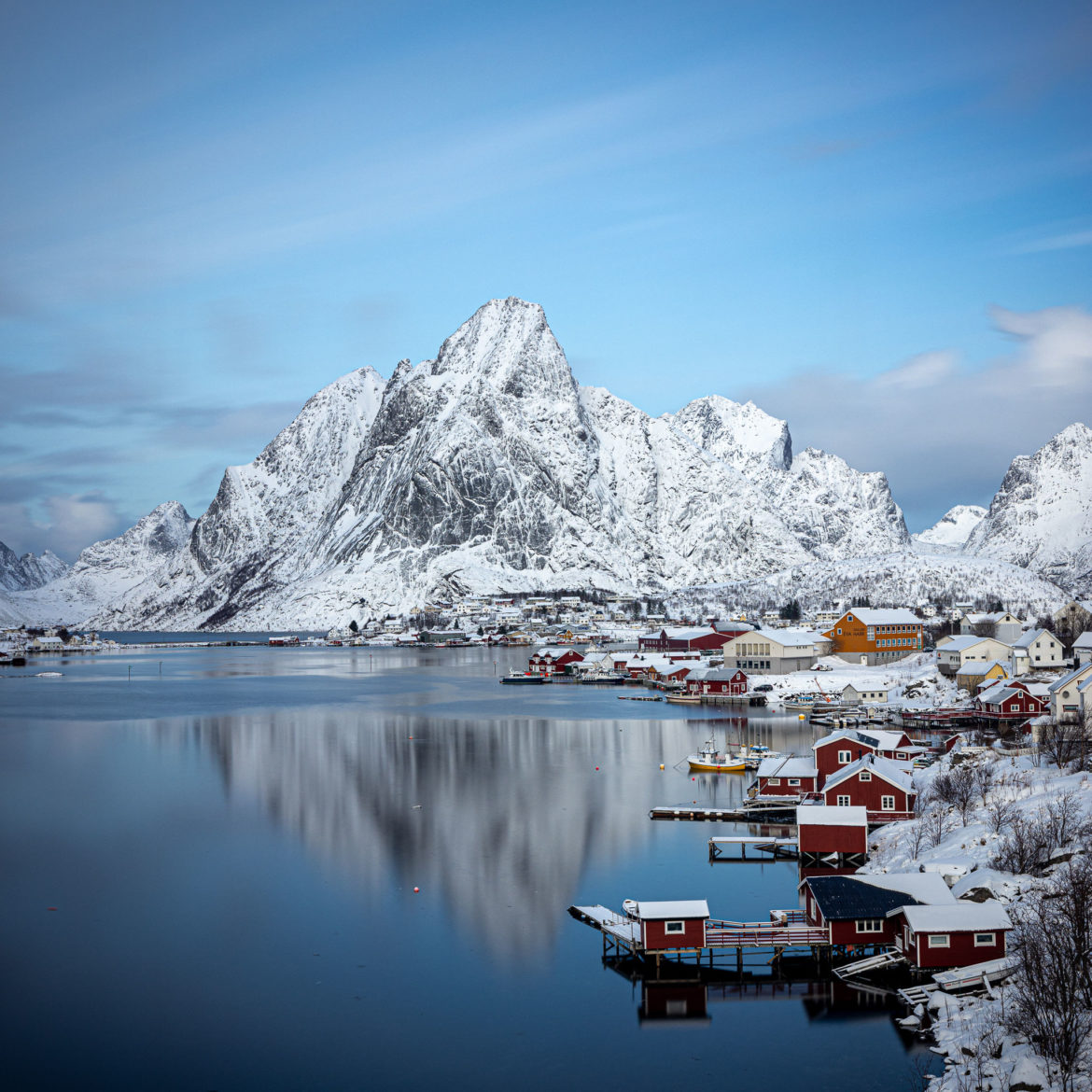 After the great beaches and a lot of attention to interesting compositions, on the second last day of the course a tourist magnet for photographers had to be approached in beautiful winter weather. Above Reine, of course without any parking possibility, because so many other photo enthusiasts were there, we had this wonderful view over the Reinefjord, more precisely over its southern extension of the bay Gravdalsbukta with the mountain Oltstinden in the background.

I also wanted to show this impressive landscape once again in the overview and therefore made a panorama to the square picture above.
Click on it, it is shown in over 3.000 pixels width here in the blog:

END_OF_DOCUMENT_TOKEN_TO_BE_REPLACED 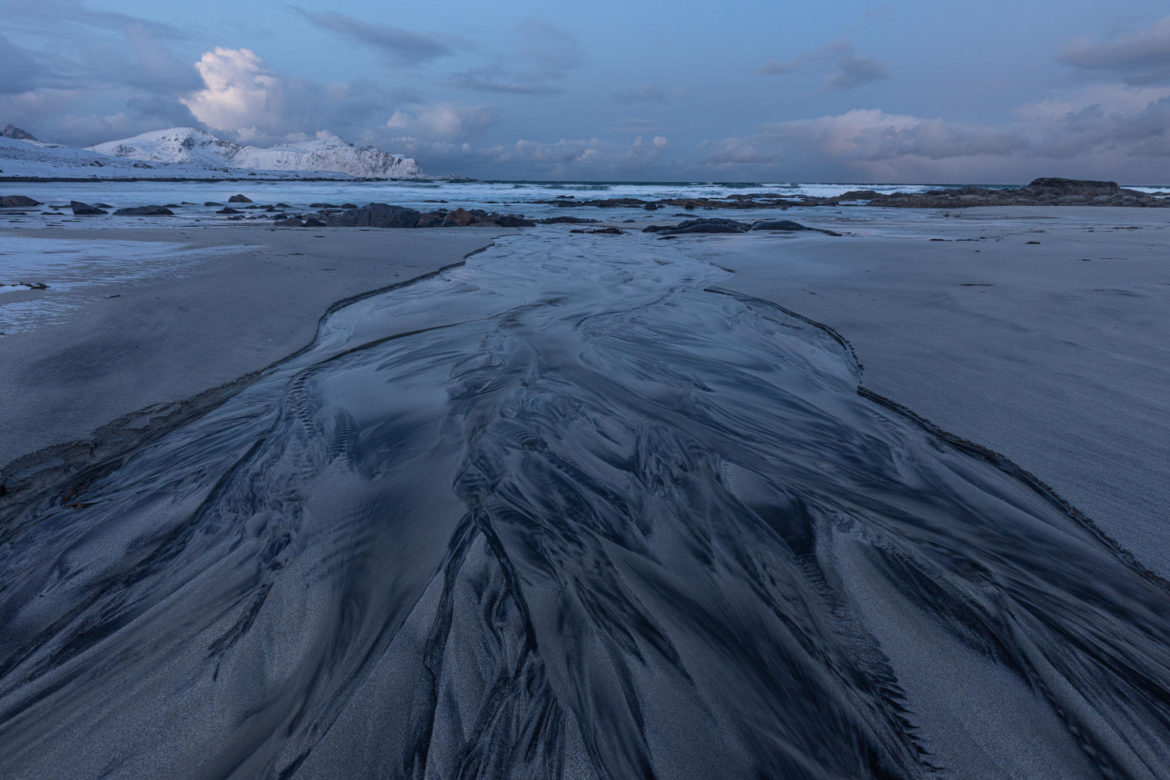 With this picture I show again something typical of the Lofoten coast. This black and white sand is on Flackstadøya. I love how the structures of the two kinds of sand mix in the stream of the little creek and reveal so many details to our eyes.

In the background, one sees the surf of the northern sea and of course again some rocks in the beach, as also the snow-covered mountains as they are visible at each shore of a beach. In January, the sun rarely comes down to the beaches. Most of the times, only the clouds and/or the mountain tops are illuminated by it. But this does not do any detraction to the picture, as I think. 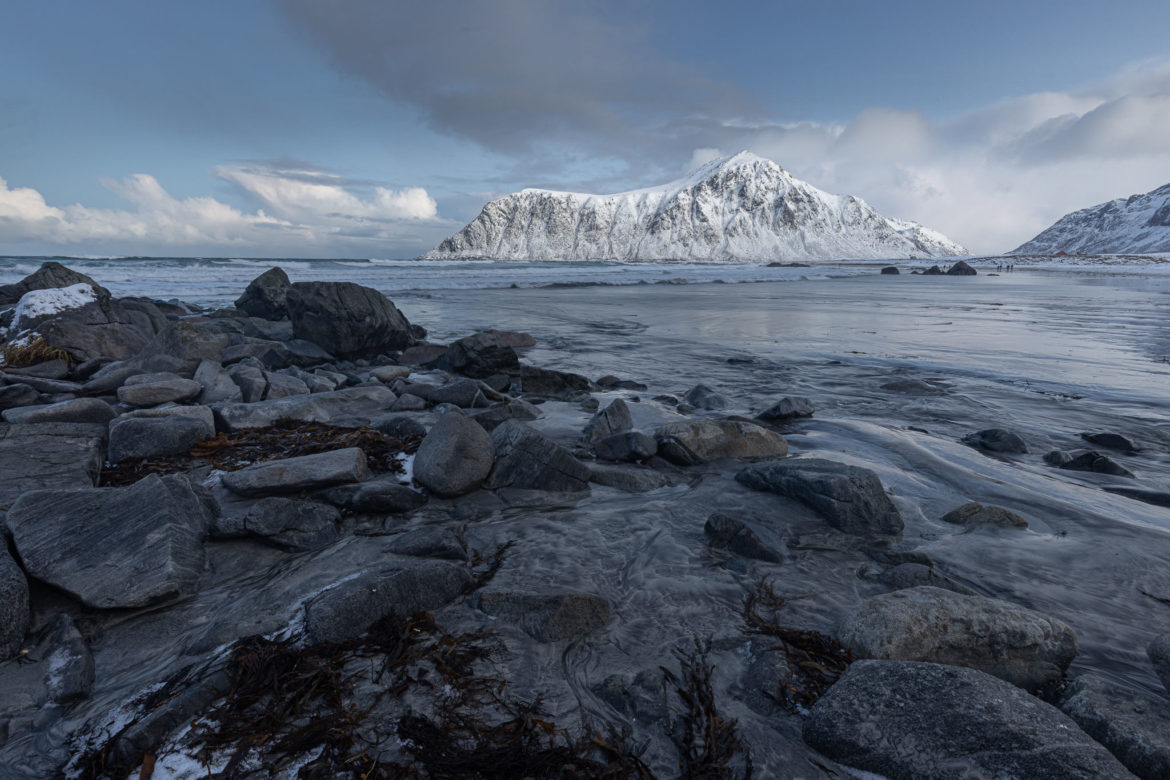 A motif without a lot of waves, but with a stone coast that opens to the beach and the beautiful snow-covered mountain ridge in the sunlight. From the foreground, two watercourses draw themselves into the picture.

All without much drama, maybe that’s why I love this picture with its calm expression. 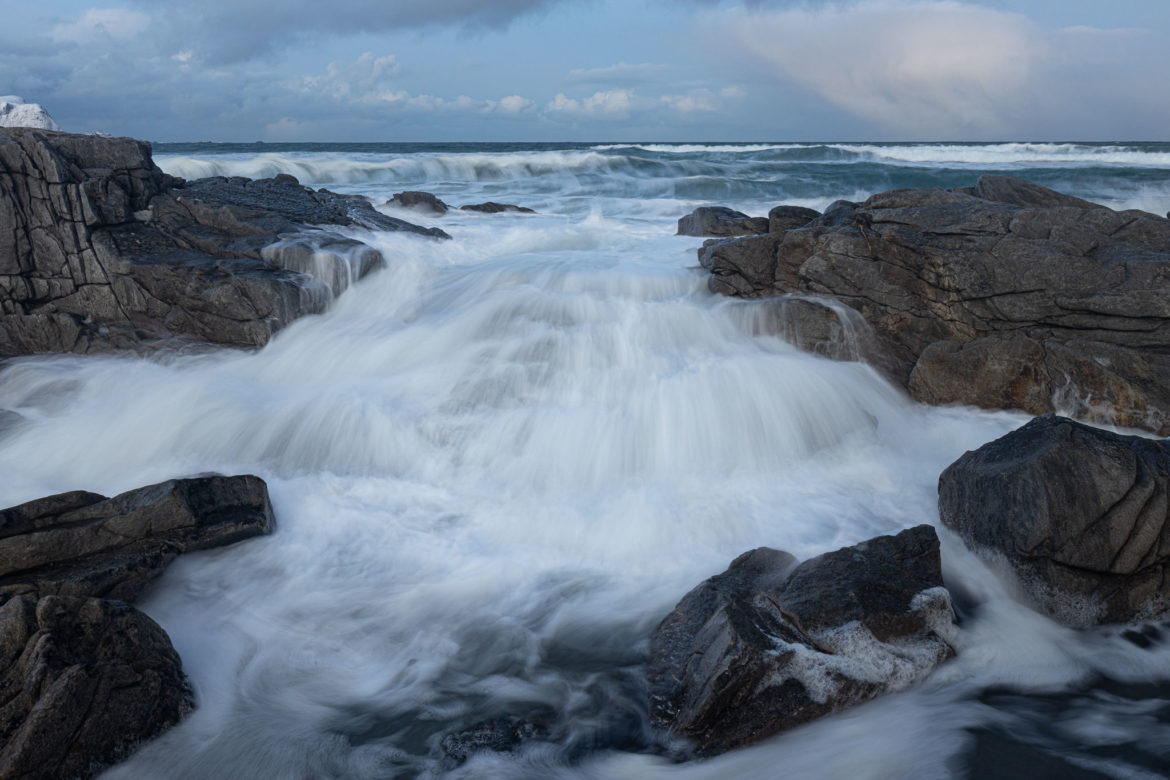 After I almost lost my tripod shortly before — only 5 minutes before it was standing with one leg where the surf shot through the gap * — I was able to take this beautiful motif with me.

For me it is one of the pictures that express a lot about the coast of Lofoten. Again and again one has rocks in all possible forms lying on the shore of the North Sea. Always you have a more or less strong surf, which makes it so interesting to stand on the shore and look at it.

With the rising tide, as we had it in the days on site, the surf on the rocks changes again and again, first it crashes against him, later it shoots over him.

* By the way, we had learned right at the beginning of the course never to leave our camera alone on the tripod, e.g. to change a lens. If the camera was on the tripod, then always one hand on the tripod. I had just reached for my camera here when the tripod was washed away behind my back. So the damage was only a tripod head and not the whole camera with lens! 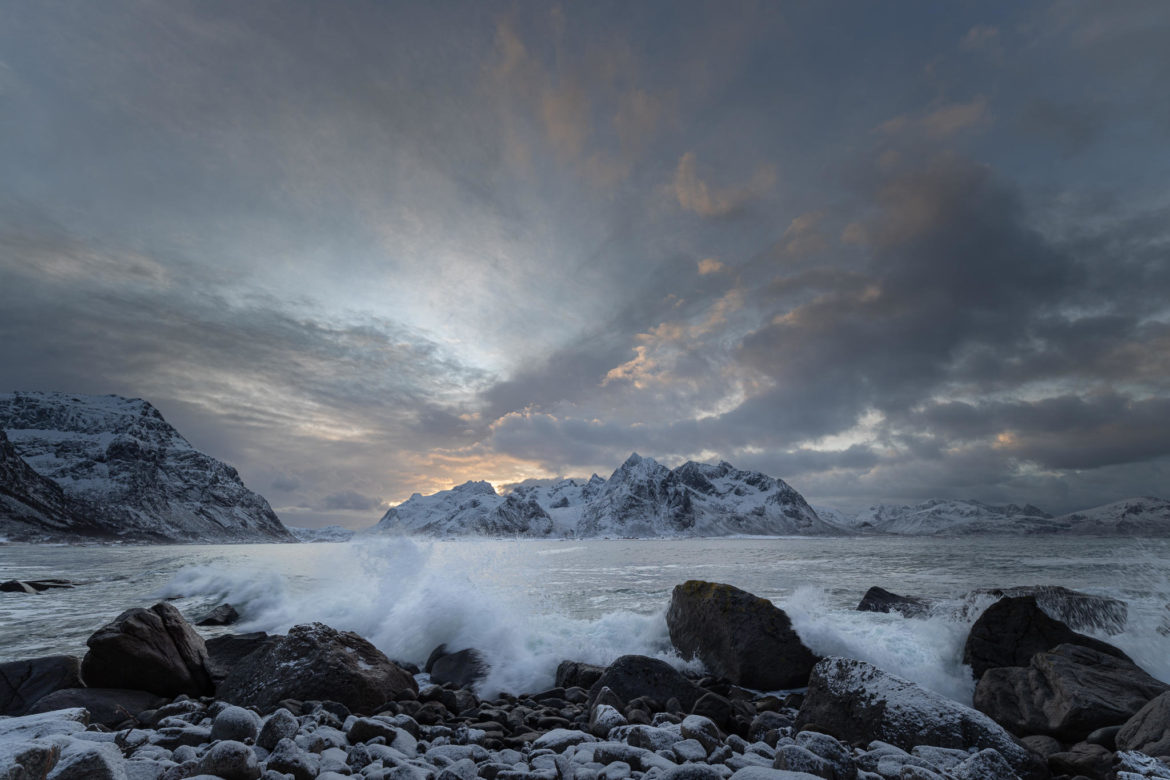 The focus in this picture is on the sky in contrast to the previous picture, where I wanted to emphasize the surf. Only a quarter of an hour later and especially with a much larger angle of view I had a different picture effect.

Isn’t it wonderful how differently you can picture a place? 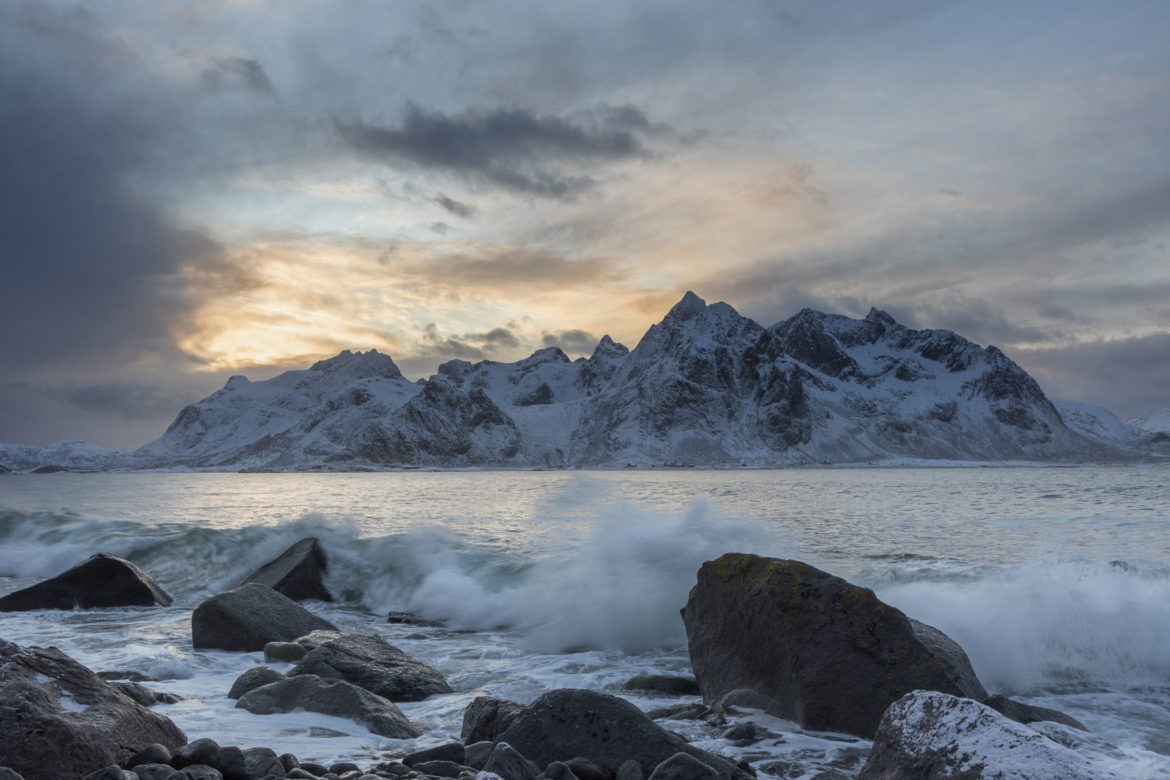 The really beautiful thing about the Lofoten are the wide fjords. Again and again, one sees on the other fjord shore some great snow-covered mountain ridges, most of the times still with a great light in the sky above. One has to search a little in order to find an interesting foreground that one can always put in a different light.

Here it is the surf that meets a rocky coast and fascinated me. So completely different from the soft colors and/or moods of the last pictures but just as typical for the Lofoten. 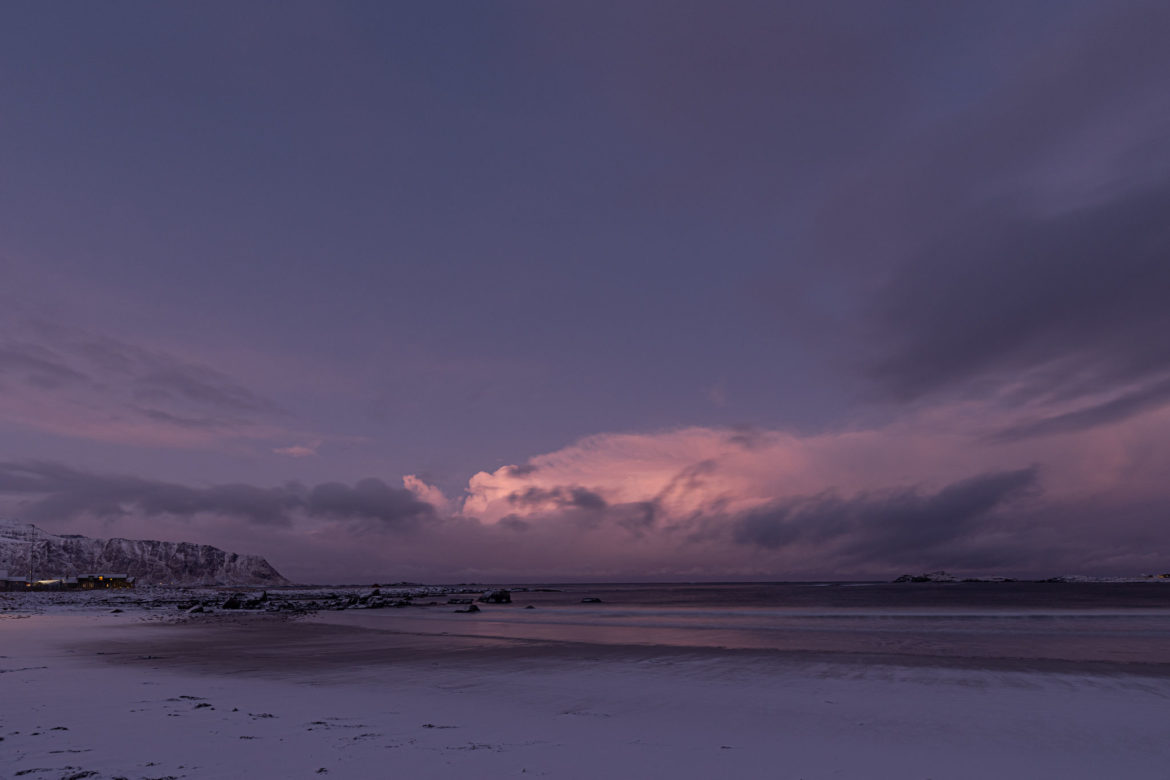 This was not on the workshop agenda, we were never out that early. Even before the morning meeting for a little theory and the following departure to possible motives I just came back from breakfast to my little camping hut, when this light captivated me. Over the beach of Ramberg a purple sky stretched out. Even the snow on the beach had taken on this great color and a band of clouds shone all the more strongly in violet.

The sun hadn’t risen yet — it should even take another hour until sunrise — but the clouds were already illuminated. For a quarter to half an hour this light mood remained, before it slowly became brighter and the clouds took on a more yellowish color. Once again I was at the right place at the right time!