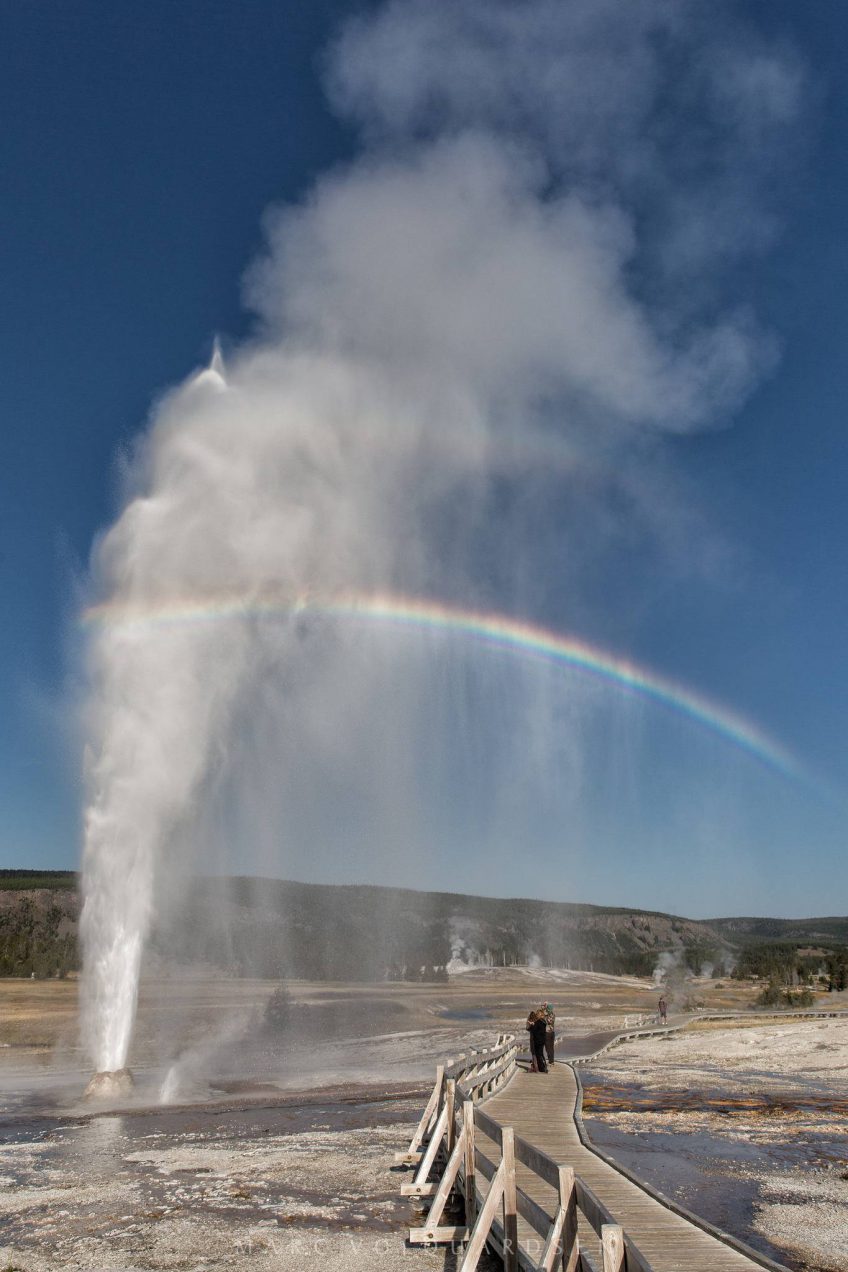 The Great American Eclipse, 21st of August — and we weren’t there. Just arrived in Old Faithful, it was soon clear to us that we didn’t want to make our way to the solar eclipse on the only road from Yellowstone to Grand Teton National Park. There would certainly be a big traffic jam. Therefore we planned to do a day hike through the Upper Geyser Basin, from Old Faithfull to the Biskit Basin and back — together about 7,75 miles.

As in the Grand Teton we were early in the morning on the hiking route, respectively at Geyser Hill in the Old Faithful region. There are many hot springs and geysers, the whole hill is steaming. From there you had a great view over Old Faithful with its many lodges and facilities and over to the Black Sand Basin. Everywhere we saw it steaming!

Luckily for us, we decided to take the southern route at Geyser Hill. So we got to the Beehive Geyser pretty soon. We could see the cone of the geyser lying dry, but in front of it there was a thin stream of water from the ground — Beehive’s Indicator. A look at the information board revealed that this valve would announce a near eruption of the Beehive! We didn’t have to wait long — the Beehive only erupts every 14 hours and we happened to be there! And because of the solar eclipse on that day, only two more people were with us at this attraction — anyone who wants to see what it looks like under »normal« circumstances there should check with Yellowstone Naturalist.

To protect my lenses for the geyser spray, I stayed at a safe distance to the east of the geyser, as it turned out to be the right decision. The way forward was completely covered by the spray and from my point of view a rainbow was formed in the spray of the fountain during the eruption. The cover photo of this article.

The Beehive Geyser has a diameter of 1 meter and pushes the water for 5–6 minutes up to a height of 200 feet — without interruption:

That was incredibly impressive! Such types of geysers are called turbine geysers because the water is expelled without interruption.

Not far from here we came to the fork in the road that would have led us west to Castle Geyser. But we wanted to take it with us on the way back. So we went further north on the way and shortly afterwards we saw the last shots of the Grand Geyser between the trees. In contrast to the Beehive Geyser, it is not an uninterrupted flow of hot water, but with half a dozen restarts in a single eruption period. The last 3 or 4 we could saw from about 300 feet distance.

Here, benches are set up in two rows for waiting spectators, but we met only one ranger, who entered the expected time period for the next eruption on an information sign. Why were we so alone? We could enjoy this nature for us!
Up to here we had hiked only about 1¼ miles and had spent more than an hour with amazing and impressive experiences. About 1 mile were still ahead of us to reach the Morning Glory Pool. But we didn’t want to be there so early because the sun had to be higher up in the sky to shine into the Morning Glory Pool.

Once again we passed so many pools and currently inactive geysers that I would like to give you just a selection of the impressions. The Giant Geyser sizzled and sounded more like an older dishwasher, so the water was circulated in its cone open to us. 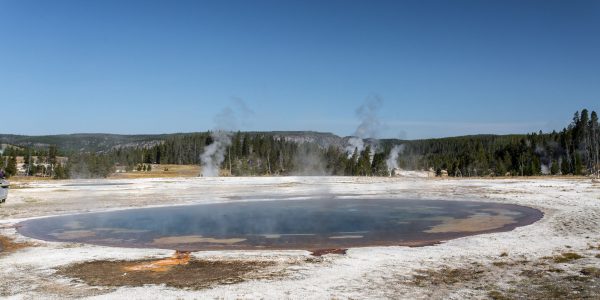 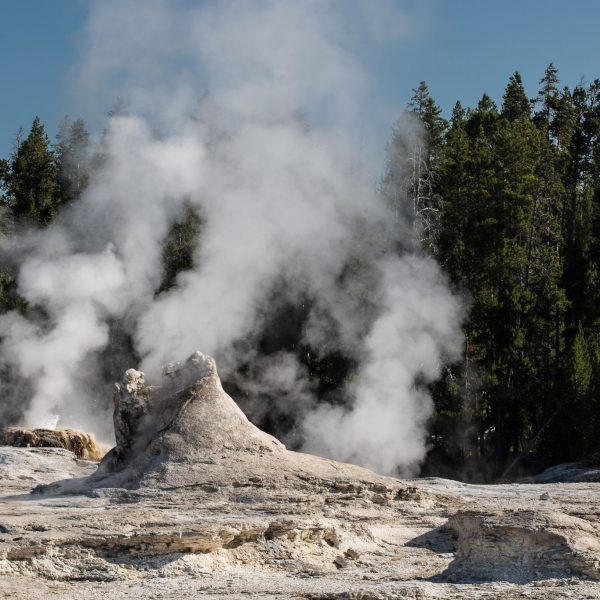 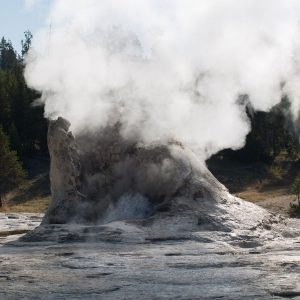 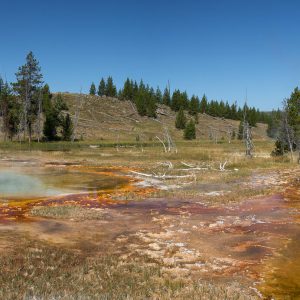 After we were on the paved and wheelchair-suitable way to the north again, we came back to the Firehole River just behind the Chain Lakes. We crossed it a third time now and again the shores were white of the silica of the many outflows of the springs. Directly behind the bridge the Morning Glory Pool is on the left. This famous pool is a typical example of vandalism in Yellowstone National Park. It used to be blue in the center, which made it clear that he was hotter then. Again and again, visitors had thrown coins into this pool, which increasingly led to a blockage of the inflow and thus cooled the pool. Today it is dominated by green.

The pool was still nice to look at. The bright spots on the water surface were dead insects, including dragonflies.

Then we went on towards Biscuit Basin. The path changed. It was no longer paved but a simple gravel road and led through a denser forest. Obviously there wasn’t that much audience here either, because at the beginning there was a sign in the middle of the road, which warned against the dangers of bears. That’s why we were especially loud — at least in the first few minutes, until we climbed up the hill and got to some more open terrain and other hot springs. Artemisia Geyser and Gem Pool were reached: 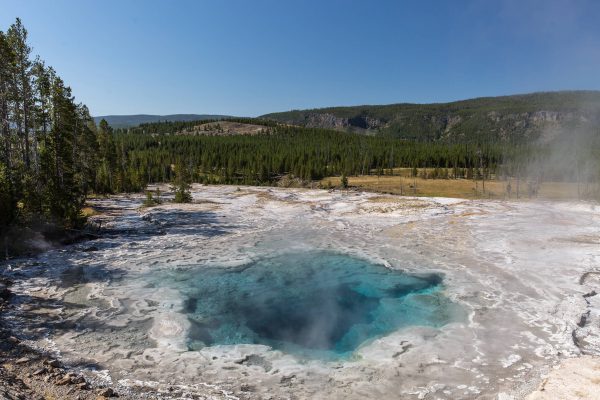 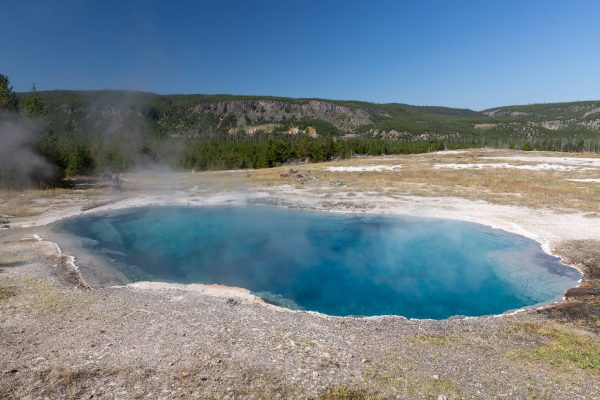 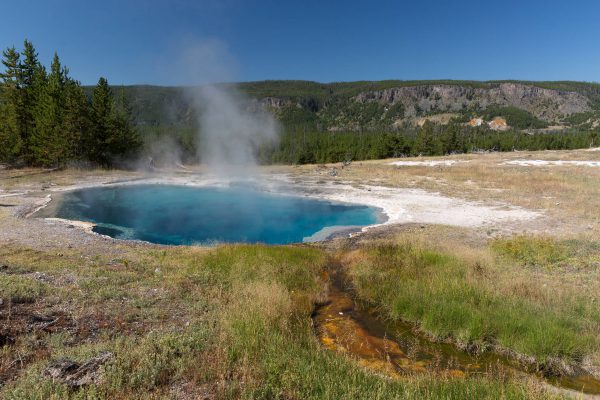 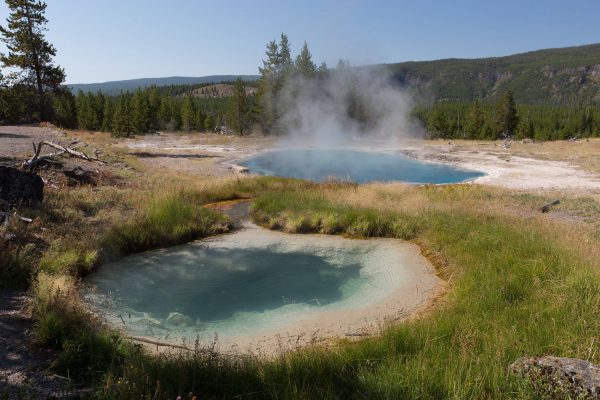 It was quite astonishing that geothermal sources could be found again and again on the remote routes. About 1 mile away from the Morning Glory Pool we came to the ring road for the first time and saw the Biscuit Basin and the parking lot, where only 9 cars or motorhomes were visible on that day. It was meanwhile 11:00 o‹ clock, normally the parking lots would be overcrowded and many drivers would try to find a place at the roadside. About an hour more and we would experience the partial solar eclipse here. Since bears are supposed to be more active in the twilight, we decided not to return to the forest at this time, but rather to take a long break in this vast treeless area.

At the beginning of the area there are two large hot pools to the right — the eastern one is called Black Opal Pool and the larger one above Black Diamond Pool. On the right hand side you can still see the Firehole River.

While we were pausing on a bench opposite the two pools, the sun was shading the moon. We were able to observe the beautiful sun crescent well. In between we helped out an Asian couple and their children with our special glasses to observe the sun. It looked like in an old Italo-Western when the dawn set in. It was a pure blue twilight — the red portion was completely absent.

Slightly above the Black Opal and Black Diamond Pool is the Sapphire Pool. During an earthquake in 1938, it erupted as a geyser up to 38 metres high and shot the biscuit-like geyserite structures around the edge into the area. Therefore the basin has its name: Biscuit Basin.

In the splendour of its pools, Biscuit Basin can be compared to the West Thumb Geyser Basin. A lake is missing in the background and you can’t see the pools from so many different angles. But it has different shades of colours in the blue pools — sometimes milky blue, sometimes crystal clear blue — and the yellow/red runoffs. 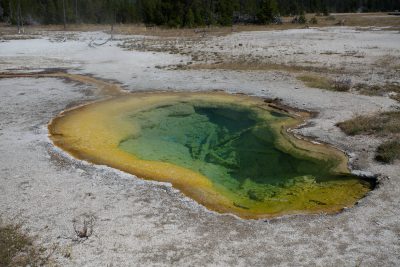 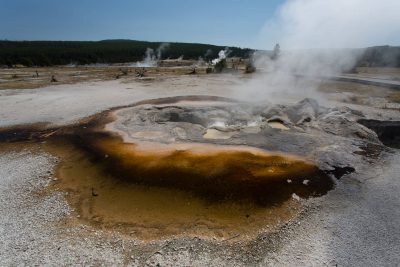 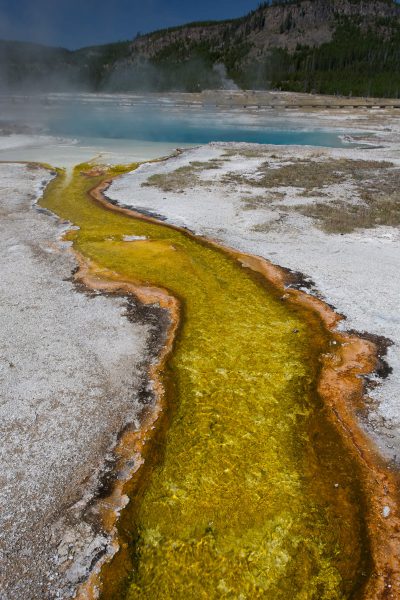 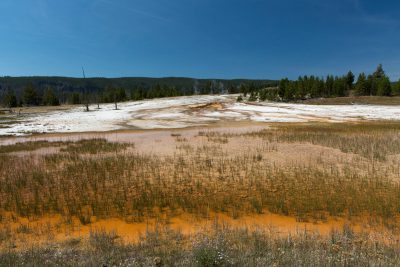 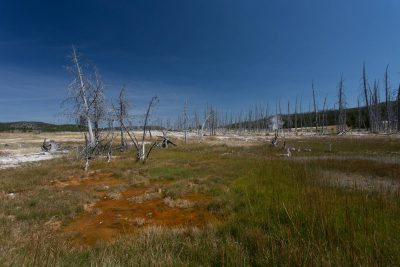 On the way back, we spontaneously chose the hiking trail west of the Firehole River. It is a small section of the Continental Divide Trail. We came through a small, relatively young forest area and often had a view of the river banks below the pools we had seen on our way there. At Grotto Geyser’s height we came back on our way. We chose again the way on the wooden planks. At about the same height as the Grand Geyer, the view of the Old Faithful area opened up. There was another geyser breaking out! Very soon it became clear that it had to be Castle Geyser. At the end of our day hike we were so lucky again — the Castle Geyser erupts only every 14 hours!

The Castle Geyser consists of one of the largest geyserite structures in the world. It is about 12 feet high and has a diameter of 20 feet at the top. Its cone is about 1,000 years old. Fortunately, each eruption lasts quite a long time, so that we were not only able to reach the geyser, but were also able to look at it before its long steam phase began.
At the end of the great day, a look back at Castle Geyser. The day began with the outbreak of the Beehive Geyser and ended here with the eruption of the Castle Geyser!