Little Sparrow on his toughest day 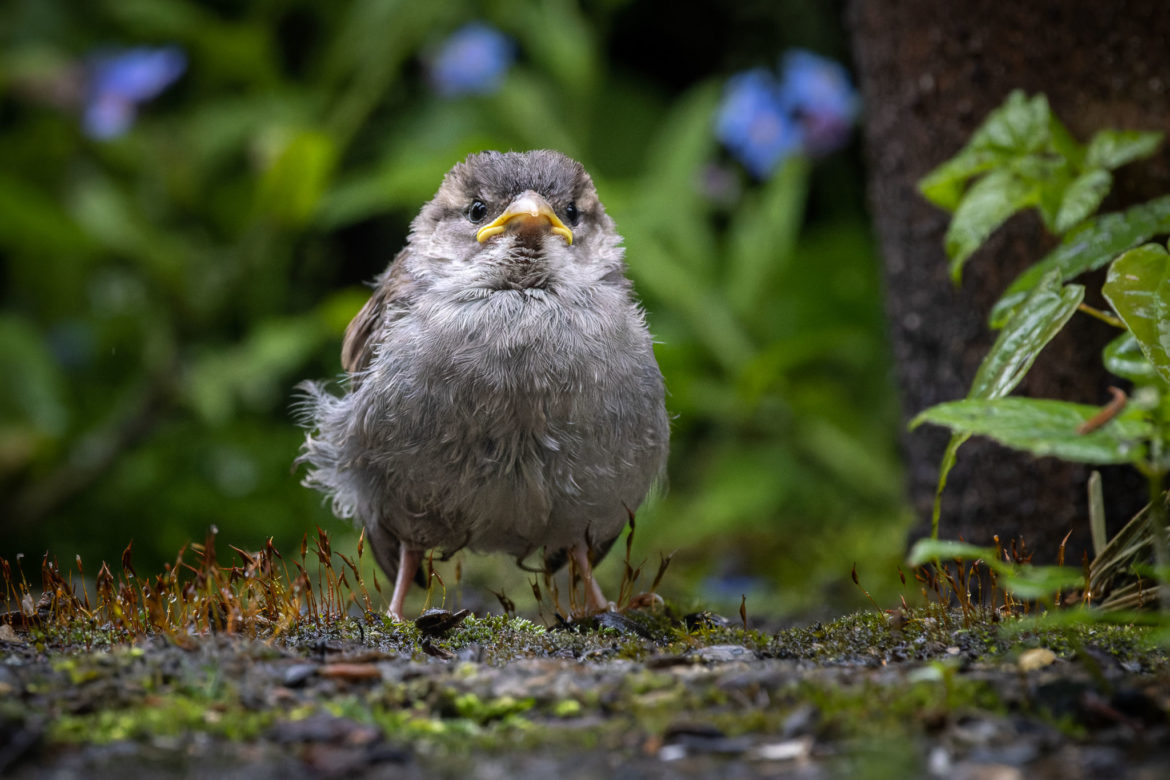 A picture story in 12 photos

»Little Sparrow« I called this young sparrow, which had probably just fallen out of the nest. He could not fly yet, when I discovered him on our terrace in the pouring rain close to one of our flower pots, he therefore did not come on one of the surrounding branches. I took all the photographs in this post from the slightly open patio door, I lay there on the ground for quite a while to get more or less eye level with Little Sparrow.

A bit grim but also self-confident he seemed to look at me.

He kept coming out of hiding when the mother bird was around to quickly flap his wings, typical of a branchling, to draw attention to himself. I think I captured it quite well in the series with the 3 pictures: 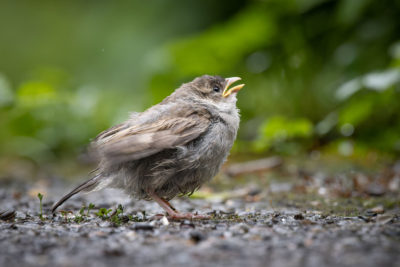 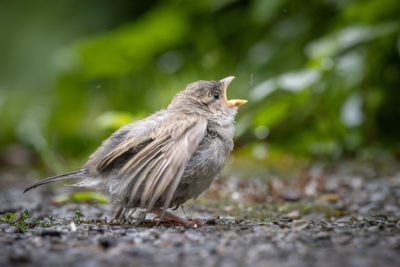 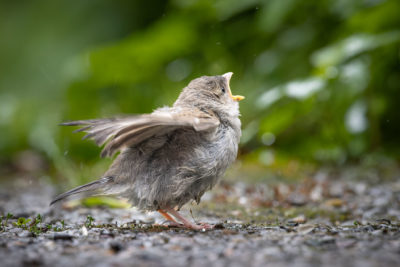 In the series of pictures you can also see how it was raining and how wet the little bird was! But the waiting was worth it, the mother came down to him once and had food with her. Several times she stuck her beak into the wide open branchling beak. I thought she had so much with her and only later noticed on my photos that Little Sparrow was so weak that he mostly could not take the food at all.

A little later he had come further out from under cover and looked up at his mother. She sat in the rhododendron bush with a seed in her beak and looked down at him for quite a while. As if she was thinking »how am I going to get this into him?« Also very wet, she looked as if she had gelled her hair. 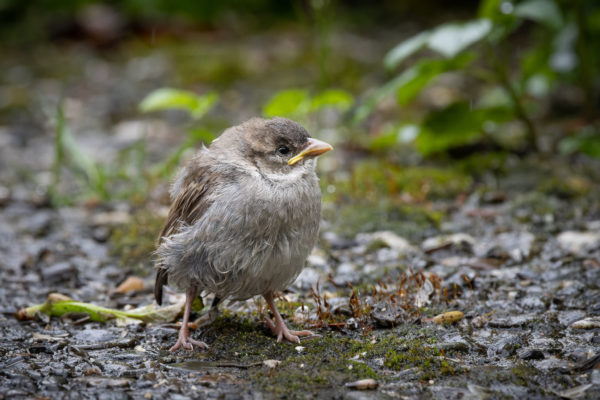 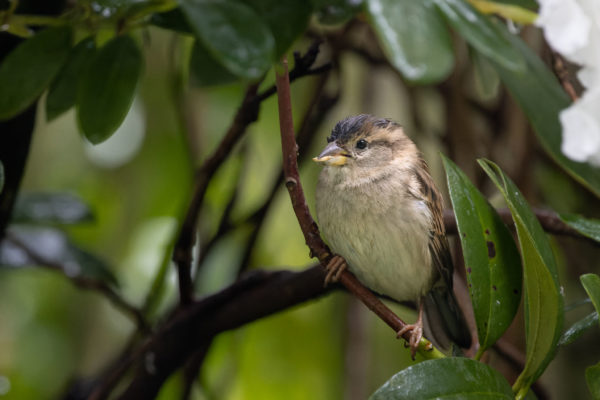 In the afternoon Little Sparrow had taken refuge on the crossbeam of one of our garden chairs. Maybe he didn’t get so much rain there, but it would have been drier under the bushes. Here I first noticed how weak he actually was. Again and again he started to wobble and although mother was still feeding him, he even fell once the 10 cm down, held himself briefly with one claw above and with the other wing below, to then fall completely on his back. I just couldn’t take pictures there and just thought about the death of Little Sparrow. But he got up again after some time, came with difficulty on the legs and soon also began again to beg his mother for food! He had made it again!

Many hours later (5 hours after my first sighting) I saw both of them again in several feedings. I was able to take detailed pictures once again. Because Little Sparrow partly turned his head towards me, you can even see his tongue in some pictures! 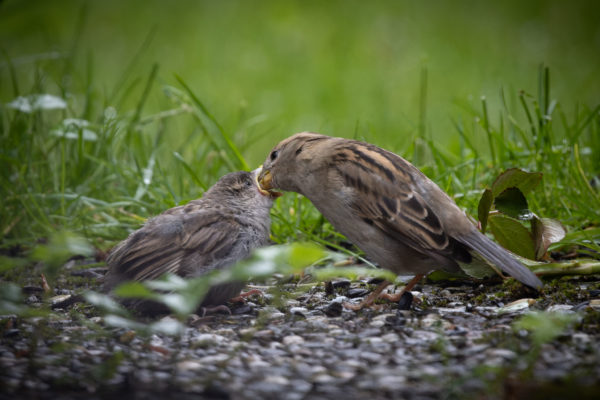 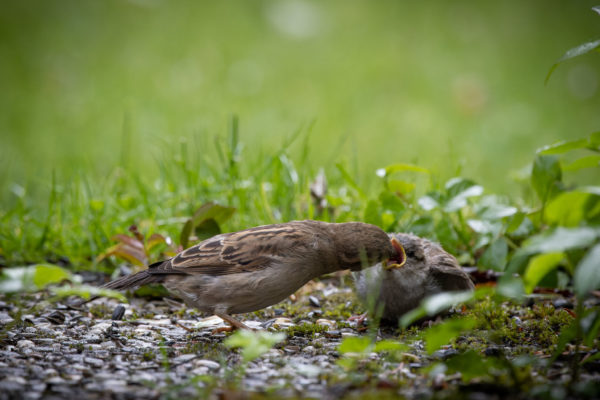 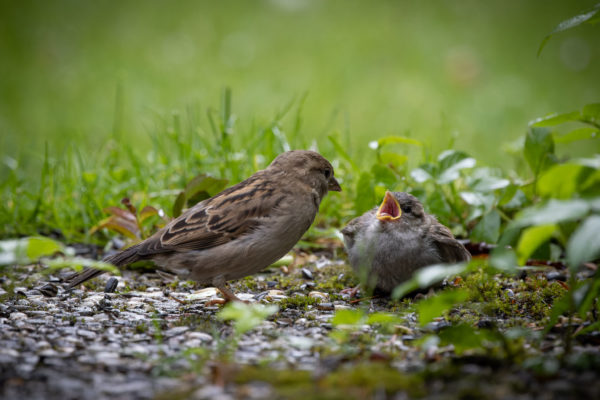 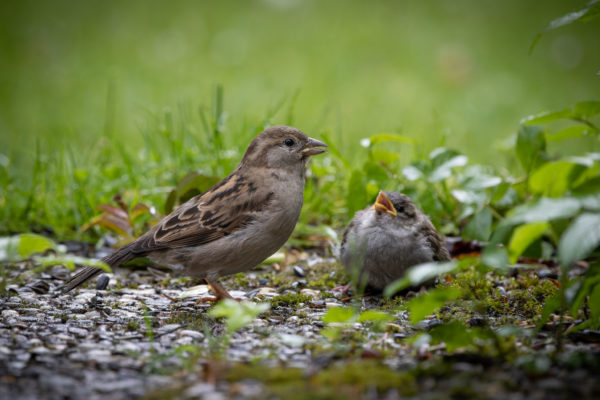 Little Sparrow had survived until the evening. The next morning I didn’t see him anymore.…